Croydon Cemetery is the only cemetery in the Dunster area and is located on the Dunster-Croydon Road about 8 kilometres east of "downtown" Dunster (see map). The Dunster Community Association is responsible for the cemetery, and local residents maintain it. Burial sites are still available, although nobody has been buried there in many years.

The cemetery has existed since at least 1932, when Aaron Watson was buried there. In the 1930s, a small Anglican church was built on the site and was consecrated on 12 June 1935. Unfortunately, the building is long gone, but the survey map below shows its approximate location. One local history, Yellowhead Pass and Its People, has a few pictures of the church and the cemetery (images 165 and 416). 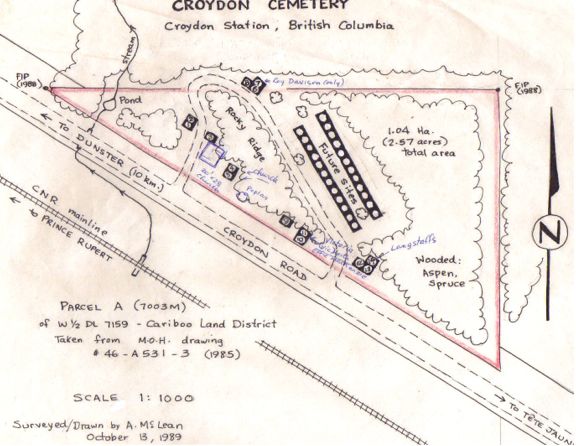 Archie McLean surveyed the cemetery in 1989, and has kindly allowed us to reproduce his survey (click on the drawing for a larger image). He notes that the cemetery used to extend out into what is now the Dunster-Croydon Road, and that during construction of the road, at least one body may have been dug up! In 2005, the Prince George Genealogical Society transcribed the few existing gravestones in the cemetery. Their transcription can be found here. As best as the McLeans have been able to determine, the numbered sites on the map correspond to the following burials:

(8) David Keefe (ca. 1899 - 4 Jan 1942) [there are no dates associated with this burial, but the BC Death Index records a David Stephen Keefe who died in McBride on 4 Jan 1942]. He is presumably the husband of Victoria Keefe, but no records have been found to verify this.

The above information is a compilation of information from the McLeans, from the Prince George Genealogical Society transcription, Yellowhead Pass and Its People, online family trees, the 1901 and 1911 Census of Canada, and the British Columbia Death Index. If you can provide corrections or additions to this list, please contact the webmaster.

Yellowhead Pass and Its People (see image 316) documents the passing of Victoria Keefe (given in the book as Victoria Keith) and Effie MacKenzie on 17 Jul 1943 as follows: "When Murray [Cochrane] was home on embarkation leave, a tragic accident occurred. Hugh and Effie MacKenzie, daughter Alice and Victoria Keith were driving to a dance. They drove onto the [Croydon] ferry to cross the river but for some unknown reason the car went right off the ferry into the river. Hugh and Alice were able to get out and swim to shore. Help was sent for. Tom Wilson, the ferry man, Hugh and Murray, who happened to be there, tore the roof off the car and were able to get the women out but too late. Elmer Anderson, working a cat for the highways, pulled the car from the river. Effie was a sister of Josie Adams. Effie and Victoria were buried in the Croydon Cemetery."